Claude Cahun | A mask beneath the mask

Lucy Renée Mathilde Schowb, also know by the pseudonym Claude Cahun, was born in Nantes on October 25, 1894, in a rather intellectual family of Hebrew origins. As a child she had a complicated relationship with her mother, who was severely depressed, and with whom she wasn’t able to have a serene conversation. The mother’s problems became too much for the family, so in 1898 they decide to hospitalise her in a psychiatric ward, where she died not long after. The difficult relationship Lucy had with her mother, which was practically non existent, left its mark through the course of her life: Lucy suffered from anorexia and found it hard to discern her own image and place in the world.

Growing up, her Hebrew origins make her an easy target to anti-Semitism, so her father decides to send her off to Surrey, England to study. In 1909 Cahun returns to Nantes as her father is embarking on his second marriage, to a woman who also has a daughter from her previous marriage: Suzanne Malherbe. The two girls hit it off right from the start, and from their first encounter will never separate.

Cahun declared many times that she did not feel the necessity to identify herself in a specific gender and that she could barely recognise herself in her own body. She often stated as she often said she felt it was a mere instrument through which she could discover the multiple identities with her. It is from this gender confusion that in 1917 she starts assuming her pseudonym, the name we know her by and with which she introduced herself in the surrealist art world of the time. Claude, in french, is a gender neutral name, which fit perfectly with her desire to not be identified with either gender. Cahun is the surname of her paternal grandmother’s brother, and was an homage to her Hebrew origins.

As her companion, even Suzanne Malherbe chooses an ambiguous pseudonym, Marcel Moore. Cahun begins as a writer, and right from the start she feels the need to wear costumes, disguise herself and to constantly search for an identity, or rather, various identities. Her first work, Vues et vision, is signed Claude Cahun, though she was known to have previously used other alter egos, signing her presence with a simple “M.” next to the drawing of a bird with a pronounced beak (referring to her aquiline nose), or by using Oscar Wilde’s lovers name, Alfred Douglas.

In 1922 Claude and Marcel move to Paris, in the Montparnasse neighbourhood. Their home soon becomes a meeting point, a place where artists and intellectuals can share ideas. It’s here Claude comes into contact with the post-dada (almost surrealist) Parisian group, and starts to frequently attend the first lesbian circles that are forming. The 1920s are the years when women begin to emancipate themselves, they start refuting the idea they are meant to stay at home and simply be ANGELS OF THE HEARTH. Claude start to frequent intellectual circles with men, vindicating right from the start, first timidly then decisively, a sexual freedom. Still a student, in 1919 Claude meets André Breton and contributes to the literary paper “Littérature”, becoming an acknowledged artist in the surrealist (mostly chauvinist) world. After Vues et Vision Cahun writes other literary texts, among which is Aveux non avenus (1930): an extremely visionary autobiographical collection of dialogues, aphorisms and writings of various nature, illustrated by some photomontages created with Marcel.

The most interesting work done by Cahun is her photography – not so much for its formal conception but for its human one. All of Cahuns life experiences have been captured in photographs: every single instant, every moment spent with her companion has been caught and immortalized on film. Such an immense amount which is left to Marcel, per the artists wishes. What hasn’t been destroyed by the Gestapo soldiers, who break into the house where the two lovers take refuge in La Rocquaise, as they are guilty of posting subversive posters against the Nazi regime in Jersey, can be found today at the Jersey Heritage Trust. The camera is Claude’s best ally, allowing her to investigate and discover her infinite identities. In front of this cold, impassible mechanical eye Cladue becomes her father, an odalisque, a clown. She covers her face with masks, she uses glass spheres to create reflections of her face like a fish eye and much more. She explores her own body, she violates it with drastic actions (like shaving her head completely bare) to try to understand who she truly is – or to see how many and which are the identities she can be without shame and prejudice.

“A mask beneath the mask. I’ll never cease from searching these faces” is one the of the phrases which best represents this pioneer, genderqueer body artist. Claude dies in Jersey in 1954, after surviving the abominations of war. Marcel soon follows in 1972 by taking her own life. Claude’s image remained obscured for many years before it finally obtained the acclaim it deserved both then and now.

Read other Focus on ZìrArtmag 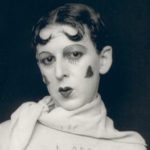