[Lupo Alberto] Right from the start, the humorous comic strip created by Guido Silvestri – aka Silver – published for the first time on Corriere dei Ragazzi in 1973, presents itself as subversive (in the strictest sense of the term). Alberto – a wolf – tried to break into henhouse to kidnap his beloved Marta – a hen – risking violent beatings from Mosè – a big San Bernard dog – guardian of order on the McKenzie farm.

A reversal of narrative custom, derived from the “laws of nature” which would see the wolf inevitably try to eat the hen, becomes a praise for love which goes “against nature” and against conventions; whose noble creator was the the cartoonist George Herriman with his “Krazy Kat” comic strip in America in the early twentieth century, in which we see a cat in love with a mouse who returns this love with bricks on the head.

Among the various characters of Lupo Alberto’s comic strip there is one in particular, apart from the main character, who monopolised the attention of readers: Enrico La Talpa. 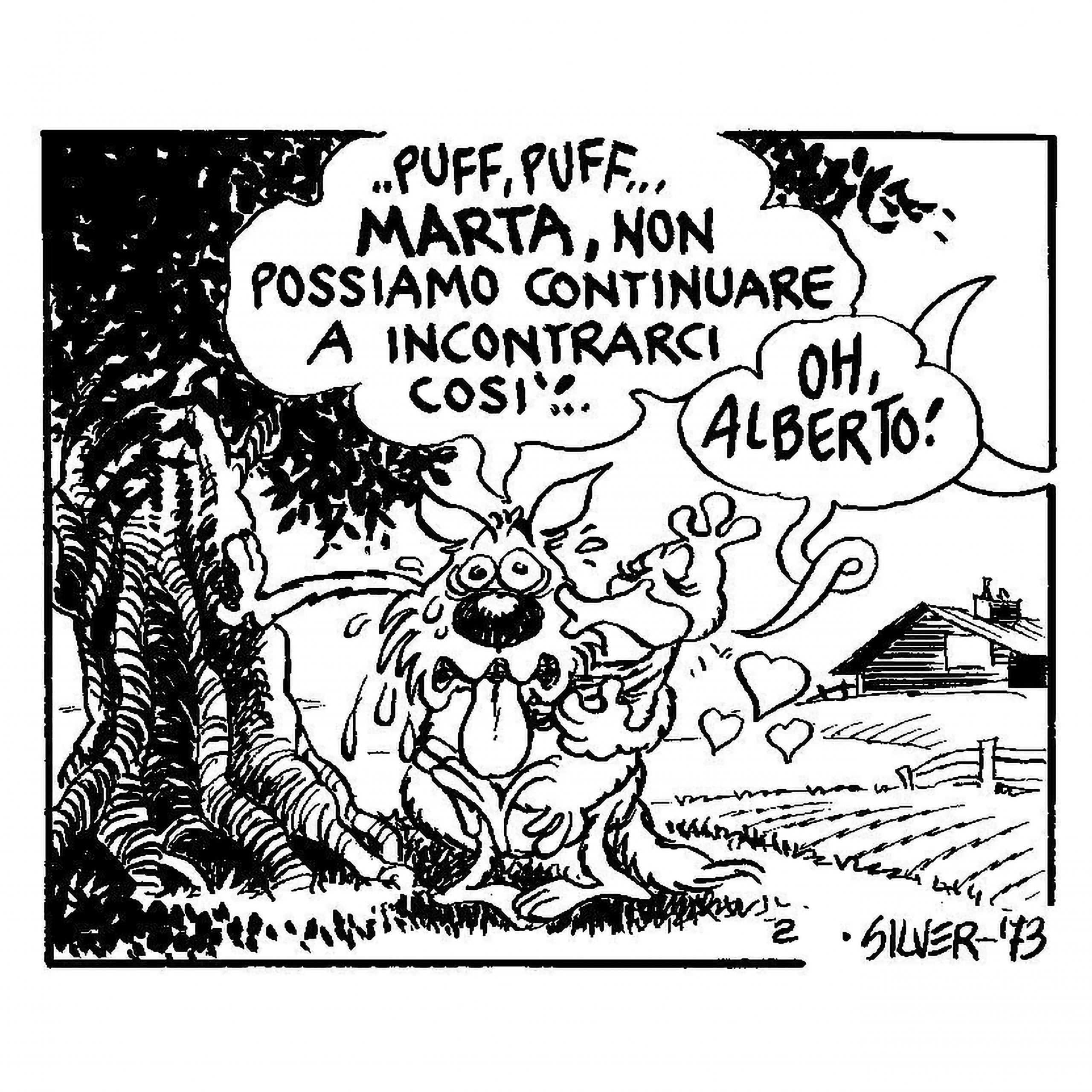 A “disruptor”, a bit of a scoundrel, and blind like the mole that he is. This character was prone to harass Alberto as he coma out of his lair underground shouting “Ehilà, Beppe!”. Over the years we see Enrico engaged in countless initiatives, some of which extravagant, and impersonating several alter-egos or boasting of various kinds of adventurous ventures. The character of Enrico La Talpa and his numerous crusades were often the pretext to insert references to current events within the comic strip. As in the famous one in which Enrico La Talpa and Lupo Alberto try to draw the symbol of “I Bravi Ragazzi” – an association founded by Enrico – and create a logo which resembles (in all its aspects) that of the Brigate Rosse, whose sight arouses an instinctive terror in Alberto.

There is a series of this comic strip that is particularly remembered by the readers: those ranging from number 766 to 908 (dating back to 1977) in which Enrico La Talpa surprises everyone by declaring himself a homosexual, and begins to walk around the farm brandishing the sign “Checca is beautiful!”, embarking on a campaign in favour of gay rights – with the help of an, at times, embarrassed Lupo Alberto. This initiative aroused, within the conformist and puritan environment of the farm, outrage and indignation, accompanied by a wave of gossip and grievances led by the dog Mosè, as the representative of order and morals – a perfect representation of Italy at the time.

«I had come into contact with FuOri (Fronte Unitario Omossessuale – Homosexual Unitary Front” Silver recalls, “and they invited me to make a comic strip on the gay tematica. The challenge with Enrico was to create and represent a homosexual devoid of the macchiettistiche characteristics attributed to gays. Precisely for this reason Alberto is baffled: he is surprise that Enrico does not have those tics, those ways of being that were assumed to belong to the cliché of Il vizietto». 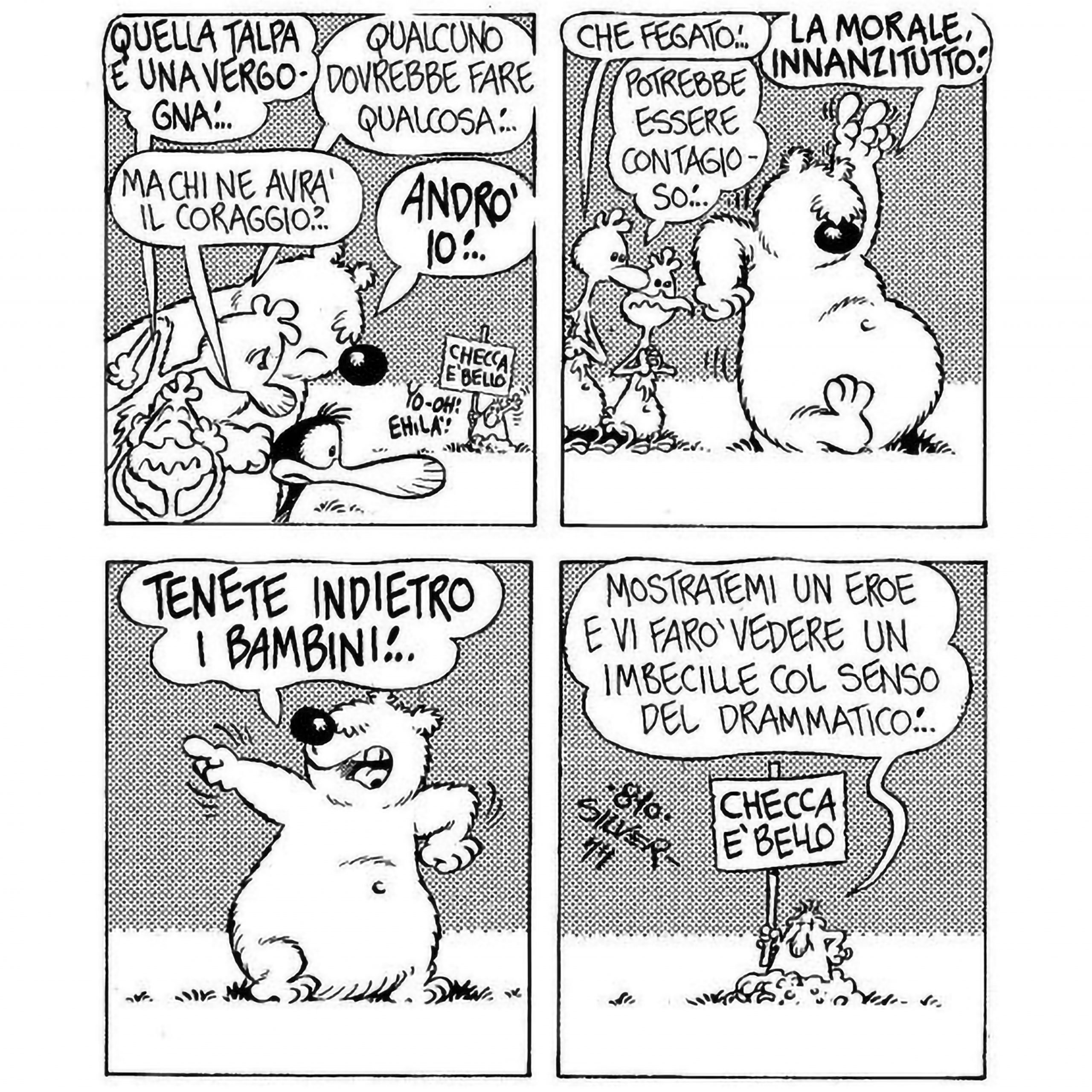 Thus Enrico La Talpa’s character, albeit in the surreal and comical way of Silver’s comic strip, becomes an activist in favour of gay rights, gaining results which go beyond simple provocation. Enrico manages to organise a parade, also involving a group of unemployed communist ants, which becomes a Gay Pride demonstration. The character’s similarity to the movements that animated the Pride marches in those years is the reason for the comic strips’ great success, a link that manifests itself in the ways and objectives of his protests: provoking, scandalising, creating interest, allowing the gay community to form outside of segregation and allowing them rights, normalising their presence within society.

There is, however, a controversial aspect about Enrico La Talpa’s figure that, especially with regards to collective sensitivity on LGBTQ+ rights, makes one wonder if the character can actually be considered an activist: Enrico La Talpa was probably not homosexual, in fact we know he was married and his life was the conventional life of a petty bourgeois, perhaps a little boring and maybe for this reason prone to a certain mythomania and a tendency to brag about life experiences never actually lived.

From the embarrassed reactions of Cesira, Enrico’s wife, who often tried to deny her husband’s homosexuality, we can assume his claim to be just another one of his boastings. Nowadays a similar behaviour would not be well met, as it is considered a form of appropriation of another’s identity, in this case concerning the sexual sphere. Nevertheless, it must be emphasised that Enrico’s intent was sincere and that his actions were those of a true activist.

The most important aspect of Enrico La Talpa’s campaign was that of fighting against homophobia in the strictest sense of the term, precisely the “fear of homosexuality”, with a method that could be defined as “shock therapy” for the farms’ inhabitants – who were so ignorant they even feared of being infected. In this context, the greatest victory is found in number 795 in which we see the inhabitants of the farm approach him, intrigued, and after taking a close look they move away giggling and embarrassed; his ironic response being “… from gossip to “Come on, let’s see what a fag looks like up close”. 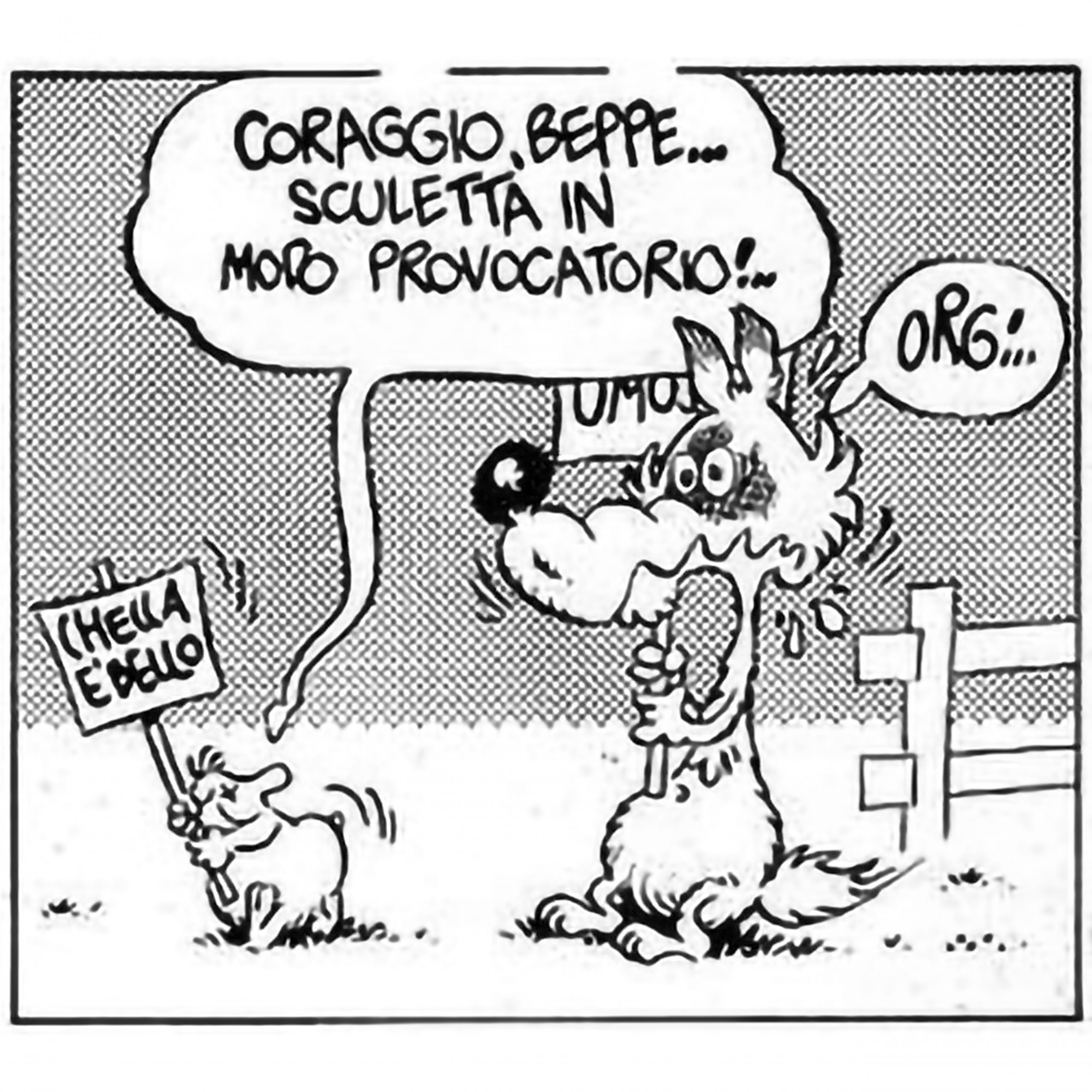 What do you think, is Enrico La Talpa an activist? Leave your opinion in the comments below.

Read other WWW+ on ZìrArtmag